The Crystal Red Shrimp, abbreviated as CRS, is a beautiful red / white colored shrimp and is very popular as an aquarium inhabitant, algae eater and ornamental shrimp.

The CRS shrimp is a relatively small shrimp that grows to about an inch when mature. The Crystal Red shrimp prefers soft moss and vegetable matter. However, the shrimp is very active, it will remain relatively calm towards other aquarium mates. The average lifespan is about 1.5 to 2 years. Between the ages of 4.5 and 5 months with a size of at least 2.2 cm, the shrimp is ready to reproduce. The CRS can interbreed with the normal bee shrimp as well as bumblebee shrimp and tiger shrimp, which are also of the Caridina species, it is strongly recommended not to keep them in the same tank.

The gender of the Crystal Red Shrimp is difficult to distinguish, especially during juvenile stage.

Females are somewhat thicker on the front, especially on the abdomen and head armor. The males, in general, have a slender light name. The females can be recognized by the egg mark just behind the head. The older the shrimp get, the better the sex can be determined.

In 1991, Mr. Hisayasu Suzuki started breeding bee shrimp in Japan, which have a color pattern of black with white stripes. Later he noticed that there were some red bee shrimp in a batch of about a thousand shrimp. He was very fascinated by this but saw that the first red bee shrimp died. Three generations later he discovered 3 red bee shrimps which he selectively continued breeding. This resulted in real red bee shrimp. In 1996 he named it "Crystal Red" and was awarded a patent for this recessive red mutation of the normal bee shrimp. Since then, the Crystal Red shrimp has been further refined and many gradations can be distinguished within the Crystal Red family.

Below is the gradation scheme of the Crystal Red Shrimp. 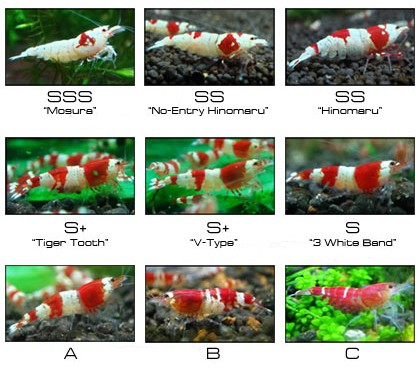 Below you can see the markings up close. 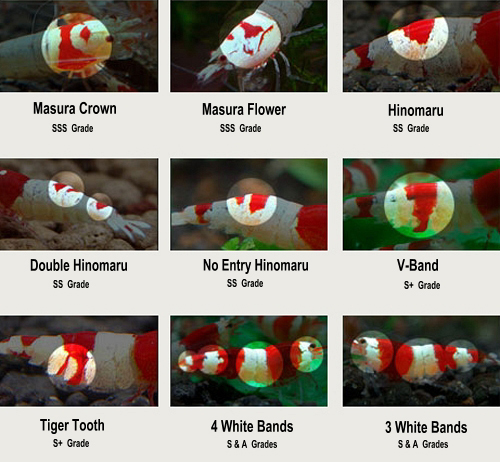 Was this information useful?